When thinking of plastic the words that often come to mind are dirty, garbage, and gross. When thinking of the word art the words that come to mind are beautiful, moving, and thought-provoking. So how can these two opposite things come together cohesively? Daniel Webb manages to do just that. Daniel is an 36 year old artist that was born and raised on the Southeast coast of England. One day while he was on the beach, he saw seaweed wrapped in plastic. He began to think if the plastic on this beach once belonged to him. This sparked Webb to start his plastic journey. Daniel Webb states that recycling was not easily accessible to him. He would have to take his recycling to a facility, rather than them picking it up. Webb decided to keep all of the plastic he used for a whole year. Webb began his journey on January 1, 2017 and by New Years Eve he had collected over 22,80 litres of plastic, or 4,490 items of plastic. He washed every piece of plastic and stored it in his home. With this plastic, he created a mural called, “Everyday Plastic”.

The most common items Daniel Webb accumulated were hygiene, food packaging, and cleaning products. These items are all used almost everyday. While researching different types of art made of plastic, something about Daniel Webb’s stuck out to me. Most of the other artists I looked at, collected trash from other areas rather than use their own. Webb used his own plastic and it was very moving to me. It shows that he is not perfect, and that you don’t have to be either. The purpose of this mural is to represent the overproduction and overconsumption of plastic. Daniel Webb believes that recycling will not do much when there is this much plastic being produced every second. He describes plastic production as an “epidemic”.

This journey was not easy for him, it took extreme willpower to not just throw the trash away. He was extremely transparent, which made the art more enticing to me. He isn’t judgemental about not fully being plastic free, he goes into detail about how hard being 100% plastic free is. Being plastic free is almost impossible in today’s way of life. Everything from food to hygiene to shoes are wrapped in plastic. It’s not about being perfect, it’s about trying your hardest. This mural is currently on display at Dreamland, which is located in a seaside town in England where Webb currently resides. You are able to get close to the mural and see what each piece is made of. This piece has moved me more than I thought it would have. I am beyond excited to see what else Daniel Webb will produce!

Plastics are all around us. Almost every aspect of our lives is surrounded by a piece of plastic. Many of these plastics are reusable, but the ones that are single-use are bringing detrimental effects to our environment. Although there are many more laws in place and much more attention on the situation, the outlook for progress does not look promising right now.

In an article written by the UN, it is predicted that “Plastic pollution in oceans and other bodies of water continues to grow sharply and could more than double by 2030…” This is quite a grim idea meaning that there is so much that is trying to be done to clean not only the oceans, but the world. The organizations like Ocean Conservancy, 4Ocean, and the newly created organization Team Seas, are all working towards cleaning our oceans, but these organizations cannot solve the problem alone. There needs to be more done by governments and us as citizens to help make the world a better place. These plastics will cause a number of problems to the environment. Not only causing destruction of the sea life and corals, the toxins in the plastics will slowly seep into the waters, further killing the marine life. These toxins can also result in the corals bleaching themselves, and we could loose all natural reefs from this. There are many more problems than meets the eye though. In the same article released by UN, plastics are also a large contributor to greenhouse gases. In 2015, greenhouse gas emissions from plastics were 1.7 gigatonnes of CO2 and by 2050, the gas emissions are predicted to be 6.5 gigatonnes. So, not only will the plastics help to add to the breaking down of the ozone layer, they will also inadvertently help speed up the rates of climate change. Luckily, the article has been written right before COP26, and will hopefully bring attention to the problem for the governments.  Finally, the article also states that recycling on its own is not enough. To fully help create change, the plastic industry as a whole needs to be targeted and there needs to be a reduction of how much plastic is made overall.

The attended audience for this article is the everyday person. It was written to bring awareness to the problem and hopefully spark change in peoples hearts to push for less plastics and a better world. This article was written just before COP26, and was written to hopefully bring more awareness to governments about the plastic problem related with climate change. The article is obviously biased to making the world a less plastic lead economy and pushing people to help fight back against the plastic industries and make the world a cleaner place.

For my blog this week I decided to look into current news stories that highlight sustainability. I came across a story about a book called Consumed written by Aja Barber. This article explains the dangers and impacts of fast fashion that are described in Barber’s book. It also recommends different ways for consumers to ease out of their fast fashion addiction and transition into living as more sustainable shoppers. From this article, it is clear that Barber’s book has a lot of similarities to Beth Terry’s book Plastic-Free: How I Kicked the Plastic Habit and How You Can Too. Both authors recognize the threat that our world is facing from things like plastic or more specifically clothing textiles. Barber and Terry both focus on the importance of personal change and encouraging others to participate in fighting back against the use of plastic.

The article opens with facts from Business Insider explaining how bad the fashion industry is for the environment. It mentions that “10% of all greenhouse gas emissions come from the fashion industry, how badly workers are exploited, and the high amounts of waste that come from the industry”. Barber elaborates on how all clothing companies will reach their downfall if they do not end up switching into a more sustainable route due to a lack of resources and the growing request for sustainable options from consumers. Barber also dives into the societal addiction to fast fashion that has developed over recent years. She explains that shopping is truly an addiction that makes people’s dopamine levels rise, hence it is a very difficult habit to break. Barber shares her process of slowly detaching herself from her favorite stores by unsubscribing from email lists and trying to avoid the stores altogether. She explains that this is a difficult process and that it is okay to mess up and fold into the addiction of fast fashion. Progress isn’t linear but the more you can keep yourself accountable, the more you will be able to become clean from fast fashion.

I chose this article because it hits very close to home for me. From a very young age, I had an addiction to shopping and I think I could say the same about most of my peers.  I remember getting Justice (a clothing brand for young girls) catalog every week in first grade and searching through it to find new clothing items that I wanted to purchase for the next time that my mom took me shopping. This continued to be a trend for me up until I started learning about the harm of fast fashion and overconsumption. Even throughout high school it was very socially important to always have the newest phone and trending clothes or else you were looked at a little differently. I think this article and book would be a really great read for kids in my generation because we truly don’t realize the harm of our overconsumption until we sit down and actually dissect it. It wasn’t until the end of high school that I started to realize the impact of my consumption especially when it came to my clothes.

While reading this article I think it is important to highlight Barber’s bias and privilege of being able to afford the lifestyle of shopping sustainably. A lot of people don’t have access to affordable, environmentally friendly clothing brands. For me, this means is that if you are privileged enough to afford environmentally friendly brands and are aware of the dangers of fast fashion, you should put your money where your mouth is and vote with your dollar bills. Money is the main thing keeping fast fashion in business so if we are able to pull the plug on their funding, it won’t be able to survive.

Today there are many different forms of art and today there is also a lot of pollution and some artist will collect plastic waste and make it into art. An artist I found named Eduardo Srur one of his pieces of artwork is very interesting in this art installation the setting is in what one would a assume is an aquarium and in the aquarium is all types of plastic and waste. That could be found in the ocean and there are people there pointing and looking at all the garbage and being in awe. 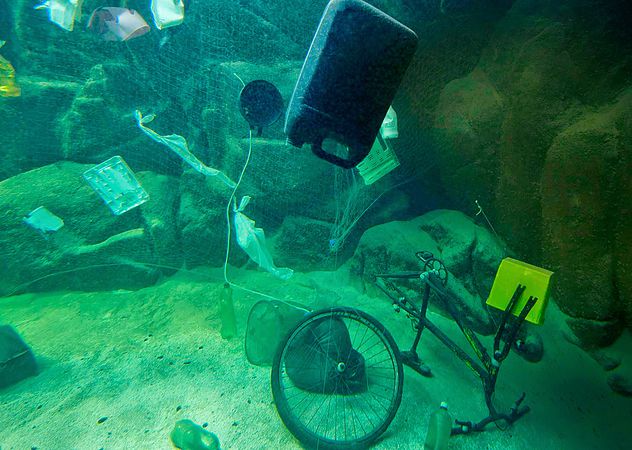 What he is saying about us is that even if an issue is raised and is put in front of people they will still be ignorant to it even if its in their face. It can also be thought of as plastic taking over the wild life and if the pollution is not stopped our marine life will be the equivalent of plastic bags because that will be all there is for them to eat. I really enjoyed all the angels that the pictures where in.  It reminds me of angels that would be used to take pictures of fish but in fact it is garbage that is possibly in the oceans. 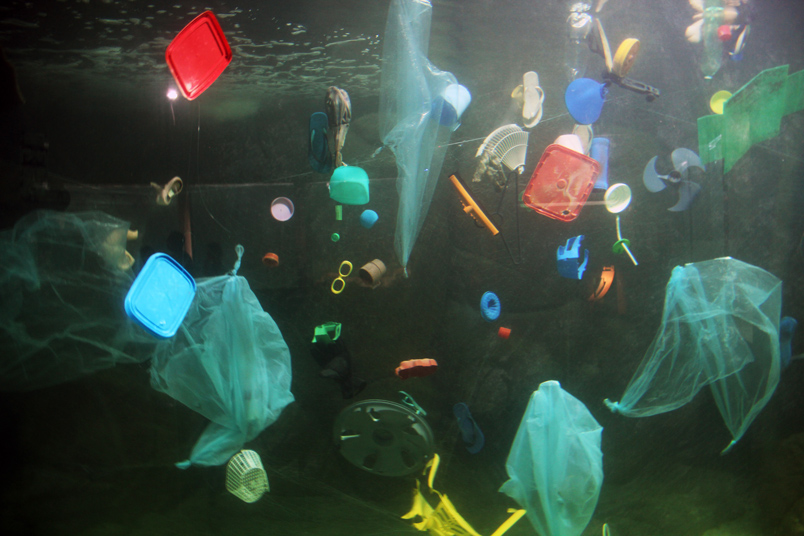 To observe some possible biased when looking at Eduardo’s site with all his art installations he has a few pieces that relate to the plastic pollution problem. In each piece there is the idea of people ignore the issue at hand and continue on with their lives. I think he does have a biased when it comes to the subject of plastic pollutants. 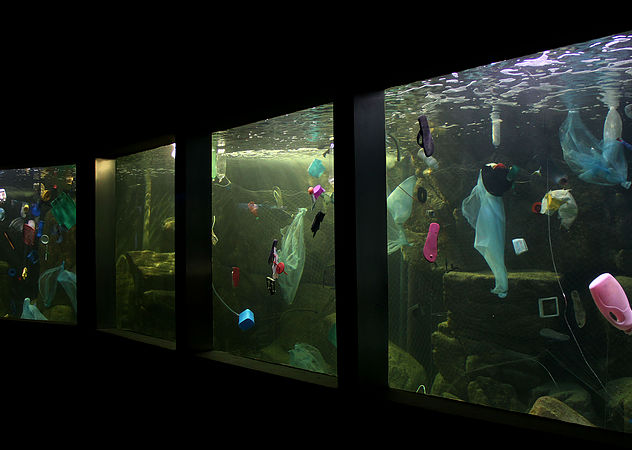 all these pictures are taken by Eduardo Srur from 2014