On Friday, Feb 3, the annual ‘Classical Charleston‘ lecture series came to a close. In typical fashion, the speakers represented some the leading voices in this year’s theme on the power of historical writing to form (and transform) cultural perspectives.

Over the past 6 years, the Department of Classics and a variety of partners have brought to campus leading scholars to speak upon topics of interest to the wider community. This year’s theme is firmly placed among past topics such as:

The Department is thankful for those friends and associates who make this event a recognized feature within the intellectual landscape of the College.  In particular, the Theodore Guérard family and contributors to the Department’s General fund directly impact the Department’s capacity to develop this lecture series and other programmatic and scholarly contributions. 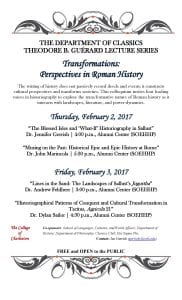