What do the political and artistic movements of the late 1960s in Germany have to tell us today in our own moment in 2018 in the United States? The sixteen students of “Deutschland 1968!” explore this question in a revue-style performance that includes self-written sketches as well as stagings and abridged performances of literary and theater texts from the era. 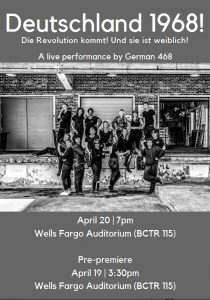