Check out this exciting article in The College TODAY about the 4th Annual German-American Business Summit! Dr. Avendaño, Director of Latin American and Caribbean Studies, interviews CofC alumna (2005) Arden Sherman to discuss her undergraduate experience at the College of Charleston as a double major in Latin American and Caribbean Studies and Studio Art, her time studying abroad in Brazil and Cuba, and her professional activities following graduation. At the time of the podcast, Arden is the Director and Curator of Hunter East Harlem Gallery at Hunter College in New York City.

Click the link below to hear the 5th episode of HispaCasts created in collaboration with Dr. Mike Overholt from the Teaching and Learning Team.

Dr. Mark P. Del Mastro, Chair of Hispanic Studies, interviews CofC alumna (2010) Melanie Keller to discuss her undergraduate experience at the College of Charleston as a major in Spanish and double minor in Linguistics and Women’s and Gender Studies, her time studying abroad, and the various professional opportunities she has enjoyed over the past 9 years.

Click the link below to hear the 4th episode of HispaCasts created in collaboration with Dr. Mike Overholt from the Teaching and Learning Team.

Dr. Mark P. Del Mastro, Chair of Hispanic Studies, interviews CofC alumnus (2008) Ryan Morris to discuss his undergraduate experience at the College of Charleston as a major in Spanish, his time studying abroad in Trujillo, Spain, and his current profession as Corporate Sales Recruiter for Blackbaud.

LCWA has three priorities during #CougarWelcome! Make your mark by donating today!

Deniz Houston ’16 jumped at the opportunity to spend five weeks working at the FIFA World Cup Russia in Sochi this summer. This international studies major who double-minored in political science and Russian Studies at the College, got to be front and center at the games – and got to use her Russian language skills, as well. The College Today did an article on her exciting time. Check it out here! Dona Totova Lacayo ’05, the chief commercial and public affairs officer at the Port of Hueneme (wy-NEEM-ee) in California, minored in German along with her major in International Business at CofC. She is featured in this summer’s edition of CofC’s magazine discussing what she’s been up to since graduation!

Check out the article here: 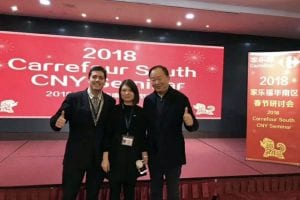 Alumni Sergio Martinez ’15 has been featured in The College Today for his notoriety at Carrefour in southern China!

Martinez studied Chinese here at CofC among many other things and credits his success in Chinese to professors Piotr Gibas and Lei Jin.

Check out the full article here.