Are we alone in the universe? It’s a question that humans have wondered about since we first became self-aware and peered up at the stars.

To help find the answer, two astrophysics majors, Lucy Williamson and Blake Mino, journeyed to the Atacama Desert in northern Chile in January 2019 to visit the La Silla Observatory and use its one-meter telescope (named for the diameter of its main light-collecting mirror). Although it’s an older telescope, it has a new, advanced spectrograph that the students will now be able to access remotely from the College, making it a terrific resource. 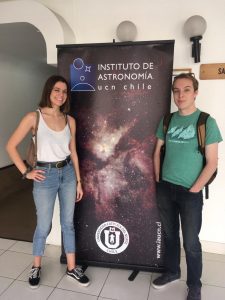 “It is very unusual for undergraduate researchers to have the opportunity to travel to a remote site to use an advanced international telescope and take advantage of one of the best observing sites in the world,” says Joe Carson, the physics professor who is supervising their research. “It is a nice example of the kind of undergraduate research opportunities that occur at CofC.”

The aim of Williamson’s and Mino’s research was to measure short-term (days or weeks) stellar activity on three young, nearby stars. It’s something that no one has really ever meaningfully done before, Carson notes, even though such phenomena may play critical roles in the evolution and/or eventual habitability of planets. A sun might be stable over a million years, but one day of high radiation blasts could be enough to incinerate all life on the surface or boil away the atmosphere on orbiting planets.

“If a planet can’t retain its atmosphere under a barrage of this stellar activity, it’s not very viable for hosting life and that can narrow the constraints for future search for habitable planets,” says Mino, whose travel was funded by a competitive grant Sigma Xi (the international honor society of science and engineering) awarded him. To cover her travel expenses, Williamson received a $4,000 Summer Research with Faculty (SURF) grant.

Mino and Carson also received an $18,000 grant from NASA to cover their salaries. NASA is very interested in the students’ research because its big stated mission over the next 20 years, starting with the launch of the James Webb Space Telescope in 2021, is to study planets in the habitable zone, referred to as “exoplanets” that can support life.

“They need to know whether the planet system they’re exploring has very little chance for life because its atmosphere has been stripped away or if the planet system is very comfortable for life,” says Carson, adding that the research will guide target selection for the $10 billion telescope.

While it will take a few more months before Carson and his protégés make sense of the spectrographic data they collected, the Chilean trip represents a milestone just on its own: it’s the first three-nation, science collaboration between astronomy faculty and students from the U.S., Colombia and Chile (CofC, Universidad Nacional de Colombia and the Universidad Católica del Norte).

During their trip, they also had a chance to work closely with the co-leader of their project, Maximiliano Moyano, a world expert in extrasolar planets and the director of Cerro Ventarrones Observatory, yet another next-generation observatory under development in Chile. Moyano, a professor at the Instituto de Astronomia at Universidad Católica del Norte, organized Mino’s and Williamson’s visit as part of the scientific partnership between College of Charleston and Instituto de Astronomia, which controls the guaranteed time on the La Silla telescope.

“That type of collaboration in astronomy has never existed before, so it’s exciting to be able to set that up,” says Carson.

In addition to working at the La Silla site, Williamson and Mino also visited the Very Large Telescopes (VLT), some of the world’s largest at more than eight meters, as well as the future site of the Extremely Large Telescope, which is just starting construction nearby on a flattened mountaintop. With its 39-meter mirror, it will become the world’s biggest when it is completed in 2025.

By then, Williamson, a senior from Charleston, and Mino, a junior from Colorado, should be well into their careers working for NASA or another space-related industry following graduate school. And whatever stellar activity they wind up discovering from their Chilean trip, they already have stars in their eyes from the experience and their time here at the College.

“It’s hard to replace the passion they both have in terms of characteristics for research,” says Carson. “They know that parts are really exciting, like when you’re on a mountaintop in Chile, and other parts you need a lot of endurance, like when you’re back at the College working at the computer for the 100th hour. That’s when that passion comes in extremely handy.”