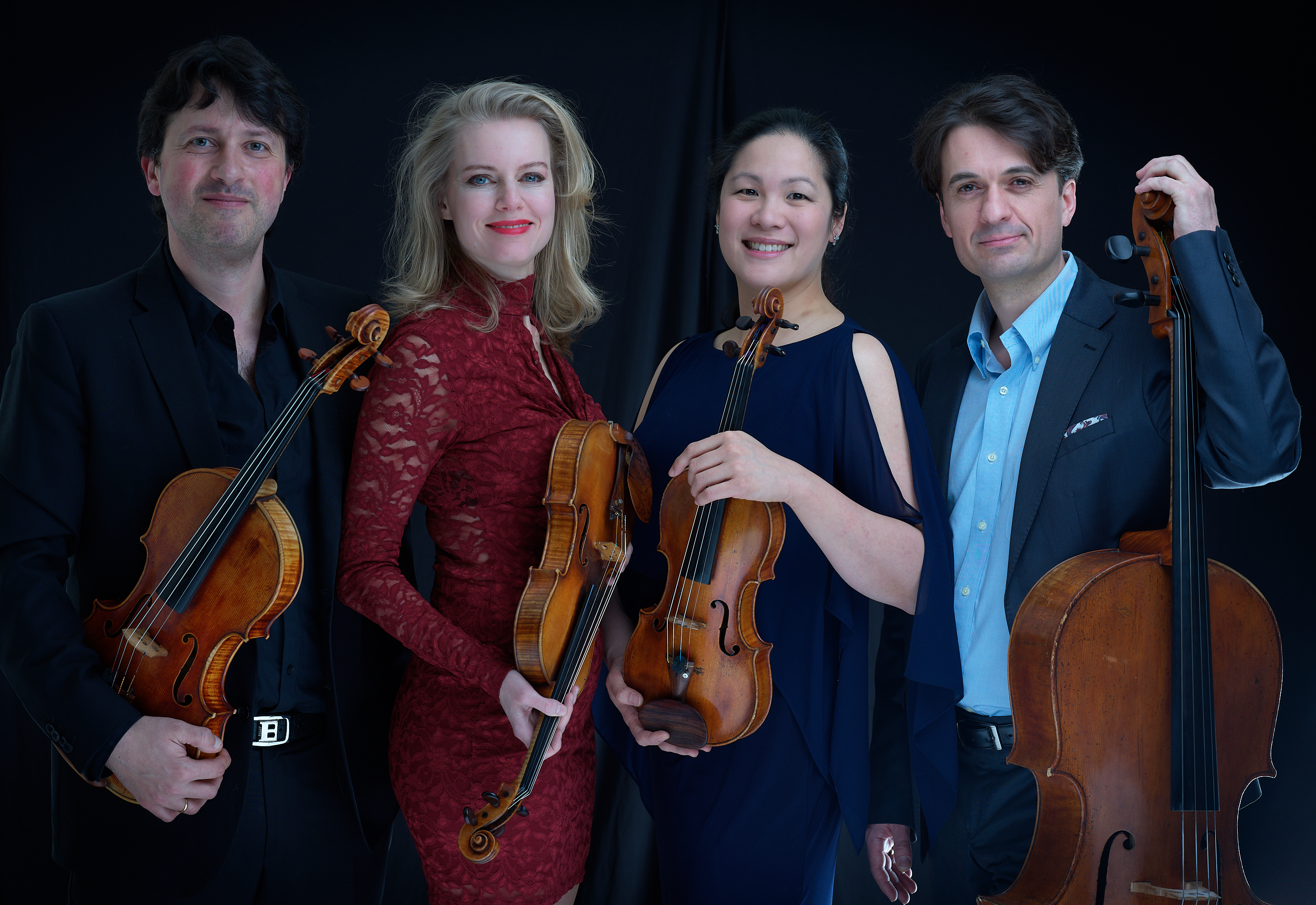 IN THE MIX Returns with Quentin Baxter, Arabella String Quartet

“IN THE MIX: An Evening with the Arabella String Quartet” will feature a conversation with host Quentin Baxter and internationally recognized classical music ensemble, the Arabella String Quartet, about recording, touring, and management. The Fall 2019 installment of IN THE MIX, the College of Charleston Arts Management Program’s music industry series, will be held on Monday, October 21 at 6:30 p.m. in the Recital Hall of the Simons Center for the Arts, 54 Saint Philip St. Admission is free and open to the public.

A promoter of classical music and renowned guest on many of the world’s great concert stages, the Arabella String Quartet is comprised of members Julie Eskar, violin; Sarita Kwok, violin; Ettore Causa, viola and Alexandre Lecarme, cello. In addition to performing, the Quartet has recently released its first commercial recording, “In the Moment,” featured on the NAXOS label. Understanding the recording process, marketing, performing logistics, and business decisions of a classical ensemble is vitally important to music industry students to better understand the business of a classical string quartet. [Learn more about the quartet members in second event info below.] This event is generously supported by the Quattlebaum Artists-in-Residence Endowed Fund.

Quentin Baxter is the CEO of his own music production company, Baxter Music Enterprises, LLC and an active performing and recording artist. He currently tours worldwide with two Grammy-nominated artists – vocalist and composer René Marie, and vocalist Freddy Cole. Baxter also tours with Ranky Tanky – the jazz-infused Gullah music ensemble which he co-founded in 2017. He received the Elizabeth O’Neill Verner Governor’s Award for the Arts in 2017, South Carolina’s highest award given in the arts, and he taught at the College of Charleston as an adjunct professor of jazz percussion from 1997 to 2019.

Launched in January 2014 with special guests Darius Rucker and Cary Ann Hearst, IN THE MIX is an Arts Management-produced speaker series connecting musicians and students to music industry leaders. Hosted by world renowned percussionist and two-time Grammy nominee, Quentin Baxter, IN THE MIX is a formal component of the course Introduction to the Music Industry, taught by Visiting Instructor of Arts Management (Music Industry), Heather McDonald. Recent sessions have examined career journeys for women in the music industry, songwriting compensation, and the music streaming business model, while former guest speakers include Darius Rucker, Cary Ann Hearst, and Shannon Herber of the GRAMMY Awards. A full list of previous sessions can be found here.

The College’s Arts Management major offers students who are musicians or interested in working in the music industry the opportunity to pursue a Music Industry Concentration, with courses like History of the Recording Industry, Music in the Marketplace, Legal Aspects of the Entertainment Industry, and more. For information, contact Chris Burgess, Director, Arts Management Program (burgessc@cofc.edu), visit artsmgmt.cofc.edu, or call (843) 953-6301.

Housed in the College of Charleston School of the Arts, Charleston Music Fest will present the Arabella String Quartet in concert. The performance will include works by Mendelssohn, Beethoven and Charleston’s own Edward Hart. This event also is generously supported by the Quattlebaum Artists-in-Residence Endowed Fund.

Charleston Music Fest presents intimate chamber music concerts featuring the College’s faculty, and local and international artists. The performance on Tuesday, Oct. 22, 2019 will take place at 7:30 p.m. at the Recital Hall in the Simons Center for the Arts, 54 Saint Philip St. General admission is $25 and $10 for all students. Tickets or season subscriptions can be purchased online at go.cofc.edu/cmf, by calling (843) 953-6315, or at the door.

The members of the Arabella String Quartet hail from around the globe and first met at the Yale School of Music, where Ettore Causa and Sarita Kwok were serving on the faculty. A veritable United Nations of chamber music, they represent Denmark, Australia, Italy and France and carry on the pedigree of great European traditions and masters—Paris Conservatoire, University for Music and the Performing Arts Vienna, and the Menuhin Academy—as well as the influence of celebrated American ensembles, such as the Guarneri, Tokyo, and Juilliard quartets. This mélange of musical training and backgrounds imbues their performances with a distinctive freshness, inventiveness, and musical depth.

In addition to performing as the Arabella Quartet, its members enjoy varied individual careers and bring to their quartet life a mature musicality and sense of equality. Julie Eskar is first concertmaster of the Danish National Chamber Orchestra, as well as a founding member of the acclaimed Eskar Trio. Sarita Kwok is resident artist, Associate professor of Music, Chair of the Department of Music at Gordon College. Eskar and Kwok switch in their roles as first and second violinists. Ettore Causa is the viola professor at Yale’s School of Music. Alexandre Lecarme is a tenured member of the Boston Symphony Orchestra and Boston Cello Quartet.

Julie Eskar (violin) currently serves as first concertmaster of the Danish Chamber Orchestra and has performed as soloist with several orchestras in Denmark and abroad. As an avid chamber musician, Eskar regularly appears at major international festivals such as Prussia Cove (England), Norfolk (USA), Horten (Norway), Incontri in Terra di Siena and BIMF (Italy), and Tivoli (Denmark) performing alongside esteemed musicians including Boris Berman, Jeremy Denk, Clive Greensmith, Thomas Demenga, Ralph Kirshbaum, Michael Kannen, Antonio Lysy, Alberto Lysy, Vilde Frang, Ani Kavafian and Ettore Causa. She is a founding member of the Eskar Trio, an award-winning piano trio. The Eskar Trio established itself as one of the leading ensembles on the Danish chamber music stage and has enjoyed great success in Sweden, Germany, Belgium, Luxembourg, France, Portugal, Japan and the Netherlands. While the trio released several critically acclaimed CDs, including their most recent recording of the complete Brahms piano trios, the album of works by Ravel and Chausson was awarded “Best CD of the Month” in The Strad magazine. The trio’s second CD, which featured never-before recorded Danish romantic piano trios, was awarded “Best Chamber Music Recording” and “Best Classical Recording of the Year” by the Danish Radio Music Awards. Active as a teacher, Eskar has given classes at institutions including the Danish Royal Music Academy and the Yale School of Music. She studied with Professor Milan Vitek at the Danish Royal Academy of Music in Copenhagen, and with Professor Gerhard Schultz at the University of Music and Performing Arts, in Vienna. She also worked under the guidance of Alberto Lysy, Ana Chumachenco, Christian Tetzlaff and Ivry Gitlis.

Sarita Kwok  (violin) has distinguished herself as one of the most captivating and sophisticated performers to emerge from the ranks of Australia’s classical musicians. Described by the New York Times as a “fine young violinist,” she has enthralled audiences since she was named Symphony Australia Young Performer of the Year (Strings) in 1998. Her cosmopolitan musical career has included performances as a solo artist, recitalist, and chamber musician throughout Europe, Asia, and North America, and as a featured soloist with the major orchestras of her native Australia. She is a prize-winner of the Kloster Schöntal, Gisborne, and Lipinski/Wieniawski international competitions. Kwok received critical acclaim for her recording of Ezra Laderman’s last three string quartets for Albany records. Her recent recording of Martin Bresnick’s Josephine (the Singer) for solo violin was described by Gramophone as “gorgeously executed.” In a 2015 collaboration with pianist Wei-Yi Yang, the album Interchange was released on the German label Genuin. The album presented a collection of 20th century violin and piano sonatas and was described by Deutschlandfunk as “electrifying.” A committed chamber musician, Kwok has appeared in performances at Zankel and Weill Recital Halls at Carnegie Hall, Sapporo’s Kitara Hall (Japan), Villa Medici (Italy), Théâtre du Jeu de Paume and Salle Olivier Messiaen (France), Melbourne Concert Hall (Australia), and has been featured at the Aldeburgh, Pacific, Aix-en-Provence, Norfolk and Rockport music festivals, among others. Kwok’s passion for performing is matched only by her commitment to education, where her analytic yet sensitive approach has made her a highly sought-after teacher. As the former director of the undergraduate lessons program at Yale University, and a Yale faculty member of eight years, Kwok is now Professor of Music and chair of the Department of Music at Gordon College, in Mass. Additionally, she is the inaugural holder of the Adams Endowed Chair in Music at Gordon College. Kwok has given master classes at Wellesley and Amherst colleges and at the New Zealand School of Music, among others. Kwok received her Doctorate of Musical Arts from the Yale School of Music, where she studied with Syoko Aki and the Tokyo String Quartet. She performs on a violin from 1736 by Italian maker Johannes Florenus Guidantus.

Ettore Causa (viola) has appeared as soloist and in recital at major venues around the world such as Carnegie Hall, Zurich Tonhalle, Madrid National Auditorium, Salle Cortot, Tokyo Symphony Hall and Teatro Colon. He performs regularly at international festivals including the Menuhin, Salzburg, Tivoli, Prussia Cove, Savonlinna, Launadire and Norfolk Chamber Music Festivals. As a devoted chamber musician, Causa actively collaborates with internationally-renowned musicians including the Tokyo, Artis, Brentano, Cremona and Elias String Quartets, as well as with esteemed artists such as Pascal Rogé, Boris Berman, Peter Frankl, Thomas Ades, Natalie Clein, Ana Chumachenco, Ani Kavafian, Alberto and Antonio Lysy, Liviu Prunaru, Thomas Demenga, Ulf Wallin, and William Bennett, among others. Causa’s collection of highly-praised recordings includes several produced by Claves Records. His distinguished recording of Romantic Transcriptions for Viola and Piano feature his work as both transcriber and performer, and was awarded a coveted “5 Diapasons” by the French magazine. In 2016, Causa was invited as a guest of honor at the 43rd International Viola Congress held in Cremona, Italy, where he performed with enormous accolades his own arrangement of the Schumann cello concerto. Causa studied at the International Menuhin Music Academy with Alberto Lysy and Johannes Eskar, and later at the Manhattan School of Music with Michael Tree. For many years after his studies, Causa taught both viola and chamber music at the International Menuhin Music Academy in Switzerland, and in 2009, he joined the renowned faculty of the Yale School of Music. Causa performs on a viola made for him by Frederic Chaudiere in 2003.

A native of Grasse, France, Alexandre Lecarme (cello) joined the Boston Symphony Orchestra (BSO) at the start of the 2008-09 season and holds the Nancy and Richard Lubin chair. As an avid chamber musician, Lecarme has appeared on the Rockport Chamber Music Festival series, the Hammond Performing Arts Series, the Copley Society Series, Hebron and Thayer Academy Concert Series, Temple Emmanuel Chamber Music Series, and the chamber music series of the Boston Symphony Orchestra. As a founding member of the Tancrede Trio, Lecarme has performed extensively in the United States and Europe. Highlight performances include concerts at Shermetiev Palace in St. Petersburg for the 300th anniversary of the city, Opera de Nice, and Salle Olivier Messiaen in Grenoble, France. Alexandre is a founding member of the acclaimed Boston Cello Quartet, lauded by Gramophone as playing “with a blend of suavity, succulent vibrato and a shimmering passion that serves the music beautifully.” Lecarme has participated at the Pablo Casals, Domaine Forget, Kneisel Hall and Norfolk Chamber Music Festivals, and has collaborated with distinguished artists including Roman Totenberg, Seymour Lipkin and members of the Tokyo String Quartet. Lecarme graduated with the Premier Prix de Violoncelle from the Conservatoire National Supérieur de Musique de Paris in 1997. Lecarme received the Artist Diploma and a Master of Music degree from Boston University as recipient of the Cohen Foundation Grant and the Dean’s Scholarship. His major teachers have included Jean-Marie Gamard in Paris, and David Soyer and Andrés Díaz at Boston University. Lecarme performs on a cello made by José Contreras in 1746, generously on loan from the Boston Symphony Orchestra.

The Arabella String Quartet events are generously supported by the Quattlebaum Artists-in-Residence Endowed Fund, which helps connect students and the community to renowned artists. With its origin dating back to 1985, the Quattlebaum Endowment has supported visits from visual artist Christo, pianist Leon Fleisher, photographer Duane Michaels, former NEA Chairman and actor Jane Alexander, visual artist Htein Lin, and Broadway veteran Bret Shuford, among many others.