For my blog, I reached out to a business to learn about its sustainability efforts. I fortunately got the pleasure to chat with a sophomore at College of Charleston named Evie Purcell who has been running her business Next Four Co since March of 2020. Evie Purcell started her business when she saw people trying to make college gear and simply thought that she could do it better. Her company started small with simple shirts, press-on letters, and the audience of her friends. She created an Instagram account and started to gain local interest during quarantine. As Next Four Co started to grow, Evie was able to invest in better equipment along with creating new designs from photoshop. Evie says that growing her business in the early stages was hard work and a lot of trial and error. From the jump, Next Four Co makes items to order which is one of the ways that her company has been able to stay sustainable. This essentially means that Evie won’t make items unless she knows that they will be bought. This leaves zero room for overproduction or clothing waste. Next Four Co almost never uses plastic packaging for their orders. The majority of the time, Evie is able to hand the orders directly to the customer which doesn’t involve any packaging. If packaging is needed, Evie likes to use reusable paper bags or brown paper lunch bags. Next Four Co also orders out of the United States for their materials to continue to push efforts of keeping transportation emissions low and the company sustainable.

More recently, Next Four Co has started making strides to become even more sustainable. Evie says that after having conversations with her roommate and friends from home she realized that she should broaden her business to create options for people who prefer to buy sustainably. For her sustainability initiative, instead of buying shirts from a big company, Evie goes to thrift stores and picks out second-hand clothing items to transform into Next Four Co gear. Although this does add extra time and effort into the production process, Evie says that she finds thrifting fun and rewarding.

Next Four Co has been inspired by big companies such as Billabong and Patagonia. Billabong uses recycled material for some of its wetsuits and bathing suits. Evie is working on replicating this process by using the thrifted items to create new Next Four Co products. Patagonia has a lifetime guarantee and is willing to revamp clothing if the product’s condition wears down. Although Evie doesn’t exactly have the ability to revamp worn-down Next Four Co items, she has talked to some of her customers and has heard things like “I will be wearing this in the retirement home”. So even though Evie can’t provide a lifetime guarantee, she knows that people will be getting tons of use out of her products which is one of the most sustainable actions someone can do with clothing.

It was truly an honor to talk to Evie Purcells about her journey of creating her brand. I came out of this conversation very inspired to support local and small businesses and continue to improve my sustainability efforts. It was especially impressive to see someone basically the same age as me pursue a passion while still putting the environment first. If you have any interest in supporting Evie and her company, direct message @nextfour.co on Instagram to make an order! Below is a picture of Evie wearing one of her products, along with another example of the type of apparel she can make! This piece of art really stuck out to me.  I think it says so much and it is disgusting but also fascinating to look at.  I read into this piece of art and it amazes me.  This piece was created by beer brand Corona and charity Parley for the Oceans collaborated  to create this  piece.  It’s called Wave Of Waste.  As I continued  to read into this I realized how much work needed to be done to create this.  But, as I continued reading, I saw that all the plastic was collected from one area.  “The plastic wave was made using beach litter collected by The Marine Conservation Society from Holywell beach, East Sussex.” 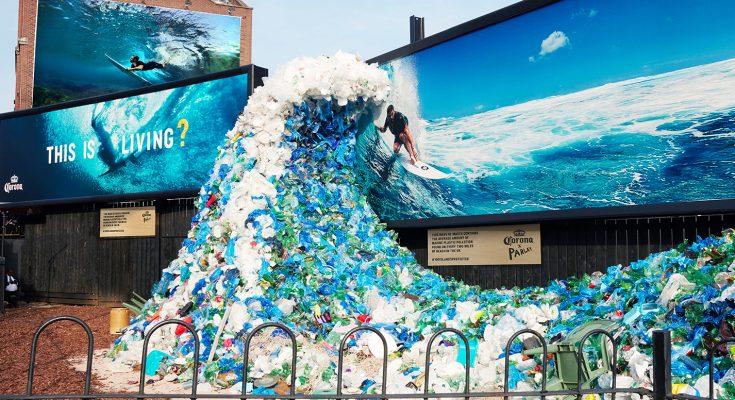 This artwork included a picture of a famous Australian actor, Chris Hemsworth.  He is surfing the “Wave of Plastic” as you can see in the background of this art work.  Another critic says how it’s impossible nowadays to go to a beach and surf without seeing plastic.  It’s very upsetting that all these beaches have so much trash on it that you can make a whole sculpture out of it.  “The total weight was 1,200kg of plastic – the amount of marine plastic pollution found on the beach every two miles in the UK.”   That is equivalent to 2645.5 pounds.  That is mindblowing that all that plastic is in one piece of art. 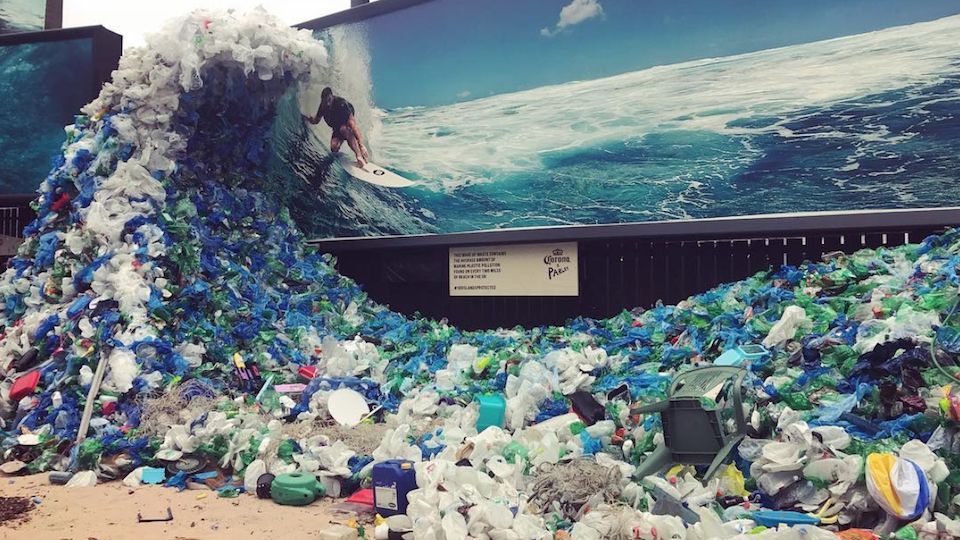