Dr. Whitney Dirks-Schuster is a new professor on the scene at College of Charleston who is actually just a recent graduate from her doctorate program at Ohio State. A dynamic character, Dirks-Schuster finished her undergrad at the prestigious Beloit College in Wisconsin, and finished her masters in nine months while studying abroad at Cambridge in England. She is currently characterized as a “visiting professor”, meaning she has a three-year contract before her position will be reviewed. It is then possible that her contract could be renewed or she may move on to her next job. Her current course work includes two entry level world history classes, in which she focuses on her specialty and the topic of her dissertation: monstrous births. She also teaches a methods course for history majors as well as being part of the team of professors teaching Honors Western Civilization 121/122.

Dr. Dirks-Schuster’s journey into the field of “monstrous births” is one that goes back into her high school days, where she began with a free Shakespeare company who would regularly meet up and perform different Shakespearean works. As there were not enough men to play the male parts of the play, she was cast, in every play she performed, as a male character. This brought on great interest in the hermaphroditic and cross-dressing elements of characters in history.

Moving up into college, Dirks-Schuster hand-designed her major in Renaissance and Theatre studies with a concentration in Shakespeare, which led her to a summer-long class at Newberry library in Chicago called “Shakespearean Rivals”. In this course, the students were assigned a project to choose a play and present an aspect of it that had historical context. Naturally, Dirks-Schuster chose “Pouring Girl” about a cross-dressing woman who ran a bar in New York. While doing her research, she happened upon an article claiming that people thought the main character in the play to be a hermaphrodite and not just a cross-dresser. Though this was wholly incorrect, it brought the question to her of the historical contexts and beliefs about hermaphrodites and other “monsters” as she came to define it.

After completing her doctorate degree, she is now working on turning her doctoral dissertation into a book, which she estimates to be several years in the making. Having spent some time while writing her doctoral dissertation in England, as well as returning there several times during her continued research on her book, she has attended several major conferences including ones specific to her field in the monstrous as well as the broader Royal Geographical society conference.

Her current ten-year plan is to team up with historians from other countries in order to analyze and map religious divides between Catholic and Protestants across Europe in the reformation period. This, she claims, is essential not just to her field, but to many historical context as well. Within this, she is already in contact with specialists in French and German monstrous births, adding to her focus on England. Ideally, this mapping will lead to a digital map (such as the Republic of Letters at the Stanford Spatial History Center) showing the progression of religion through the reformation period. This map would have the potential to change the view of many historians on the reformation period, and could affect any number of history fields by defining the geographical-religious context of the time. 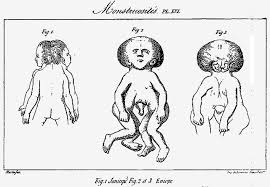 View all posts by richterll →