Whilst browsing the random and ever-expanding world of Netflix instant movies the other day, I stumbled across a recent addition bearing the ever-familiar title, Leaves of Grass.  Obviously this blatant act of theft gave me pause, and I simply had to further investigate exactly what kind of scum would dare to steal the appellation gifted to Old Uncle Walt’s masterpiece.  What unforgivable presumption!

Imagine my shock when I found that the movie was actually a recent 2010 Sundance Film Festival success, starring none other than the almighty Edward Norton and praised by Ebert himself.  What follows are my snap judgements pertaining to what I have gleaned about the nature of the movie, which I have not actually watched.  Brace yourselves, here goes.

So, Norton assumes the starring roles of twin brothers Billy and Brady Kincaid, from small town Oklahoma — which probably is still technologically and stylistically stuck in a time somewhat relfecting Whitman’s lifetime, so the movie has that going for it.  Billy has seemingly broken free of his rural roots, chosing instead a life of academia, making a respectable name for himself as a Professor of Classical Studies at a prestigious university somewhere far, far away in the 21st century.  Classical Studies?  Does this even exist anymore?  Do they mean Classics?  I was hoping he would at least be a Whitman scholar, or even an English 101 professor, but okay…
On the other hand, his brother has, of course, chosen the other side of the gainful employment spectrum, making his living growing hydroponic weed.  Oh.  I get it.  A marijuana joke.  Leaves of Grass.  Yes, very droll.  Hardy har har…watch as my laughter hides my crushing disappointment in you.  Well, he apparently has a “live for the day” mentality…that’s pretty Whitmanian, I guess.  In a grasping at straws kind of way.  Although, as Whitman was a bit of a tee-totaler, I can’t see him being too enthused about Brady’s “hobby of choice.”  He’d probably be too nice to say anything, though.

Anyways, Billy is lured home again by a fake shenanigan of Brady’s strange manufacture, and dark hilarity ensues as he meets a veritable cornucopia of “off the wall” characters in an attempt to take down the resident drug lord slash Jewish mafia kingpin (Richard Dreyfuss, and I’m not kidding).  Keri Russell potrays a supposed “intellectual, poetic” type of girl (who probably wears horizontal stripes and drinks a lot of coffee), so if she doesn’t quote Walt Whitman somewhere in the movie I’m going perform some “drum-taps” on someone’s expletive.  I suppose there is some infinitesimal, glistening nugget of Whitman to be found in Brady, who (in the only quote from the movie I could find), when asked what his aversion to proper grammar is, responds “rhythm, maybe.”  Poetic enough.

Seriously though, I make all these comments in jest.  I have no quantifiable right to review this movie, as I have not watched it yet.  I’m sure it is actually a very good movie and I look forward to viewing it once my life and soul become my own again (e.g., after exams).  After all, pretty much anything with Edward Norton is okay in my book.  The rest of the cast list is also stellar, and I must admit I am a sucker for those “indie gems” billed as dark comedies.  Let’s just say that, as a student of Whitman, I am going to be slightly skeptical of any form of contemporary media that hijacks Whitman’s master title for what seems to be nothing more than a drug reference.  I guess that makes me a literature snob. 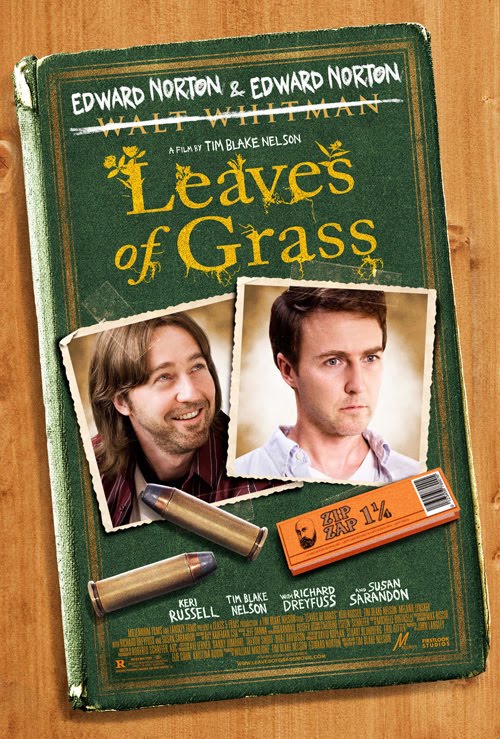