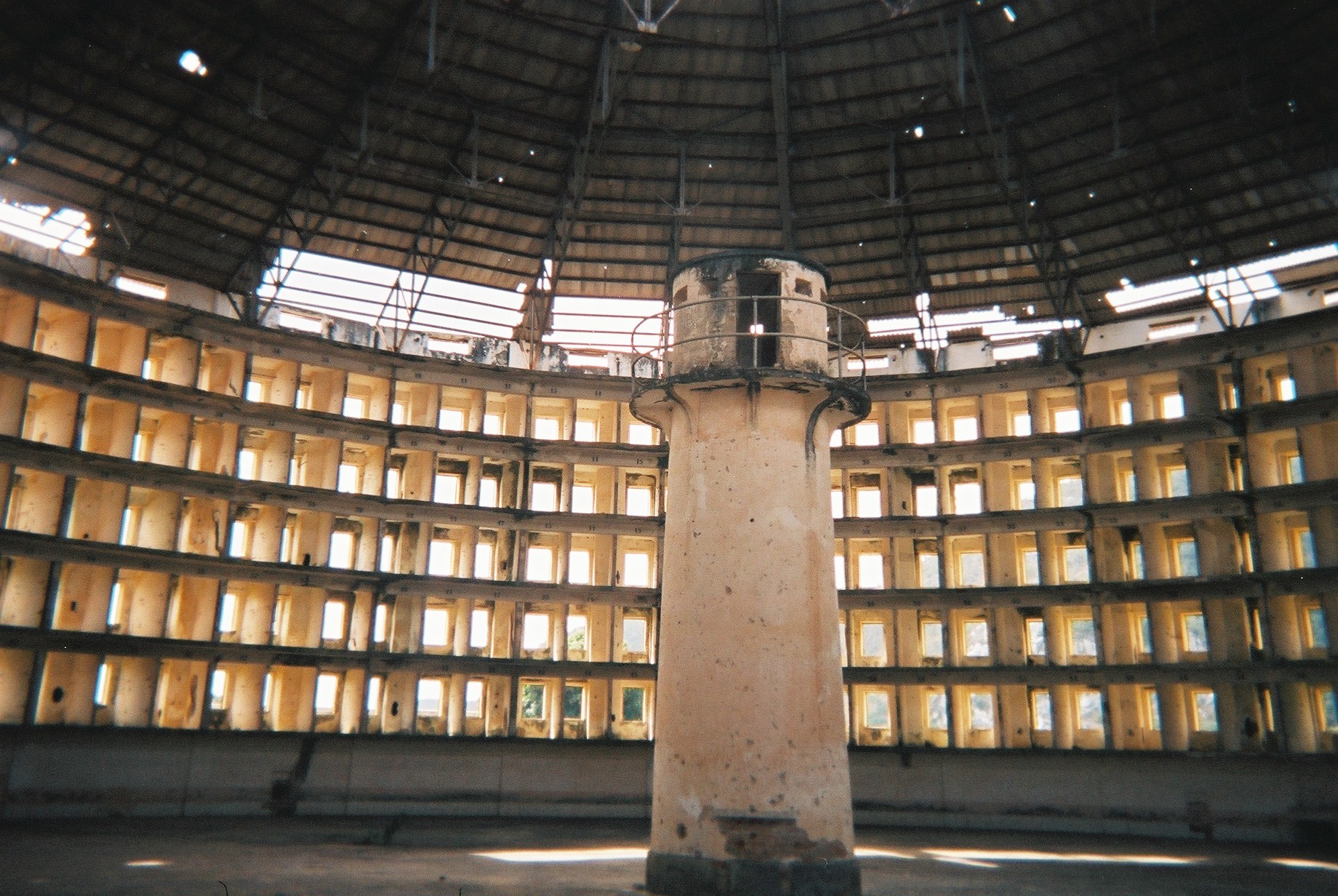 “Of all nations the United States with veins full of poetical stuff most needs poets…Their Presidents shall not be their common referee so much as their poets shall.”

“He is the arbiter of the diverse and he is the key.” Whitman’s Preface to Leaves of Grass

1. A type of prison building designed by English philosopher and social theorist Jeremy Bentham in 1785. The concept of the design is to allow an observer to observe (-opticon) all (pan-) prisoners without the incarcerated being able to tell whether they are being watched, thereby conveying a “sentiment of an invisible omniscience.”

American poetry is strung through with Anarchy. There is no anarchism, only anarchy. Thus, there are no anthologized anarchist poets, only anarchy in anthologized poetry. (Committed anarchist poets perch like vultures above your empire). Anarchy as an end-state (notice the word ‘state’) was rarely a goal or even a conception among the American poets we read today. But anarchy abounds: in denials of authority especially white male supremacy, in denials of hidden webs of power that keep citizens from autonomy, and finally, in the American poetic denial of societal poetic forms and ‘acceptable’ subject matter. I just finished reciting a few of John Berryman’s Dream Songs. Henry hones in on it:

“I am obliged to perform in complete darkness
operations of great delicacy
on my self.” 67

Reading this as a metaphor for American poetry, we learn that A) the poet must break the poem to release new energy, B) the poem must break the poet to create new literary heroes, C) the poet has to break from ‘acceptable’ subject matter, D) All of the above. Now, Berryman came after Carl Sandburg, Michael Gold, Stephen Vincent Benet, Langston Hughes, and Jean Toomer, but the metaphor is all Whitman. Whitman was the first American poet to embody other personas, thereby making it possible for us. As I mention in Specimen 2, Anarchist writings tend to deny authorship or take on pseudonyms, channeling the spirit of Anarchy rather than voicing the direct and limited views of the author herself. Anarchy involves a lot of self-revision, maintaining faith in chaos rather than stable identity. That is something many anthologized poets do share in common. It is as if they are channeling anarchy, if only for a few lines, sending a secret inspiration to the black bloc on the front.

I wonder, if these “poets of the people” Sandburg, Gold, Hughes, Toomer would have followed through with their radical ideals, and abandoned Communist and Socialist leanings had they seen the breadth of Anarchy today: since the 1999 Seatle WTO protests, among increasing evidence of global warming, since the surfacing of anarcho-primitive texts, since the carnivalesque direct action approach of Crimethinc, since post-Left Anarchy. If given their full freedoms of speech (which does not exist in America and never has), I ask the question if these poets would have taken their radical statements further by blatantly backing insurrectionary actions or taking them on themselves. Given the opportunity of the Civil Rights movement, I wonder if they would have escalated things further. However, suppressed by both the first and second ‘Red Scare’, I wonder if these poets indeed knew things they were too tied up to say.

“Harlem”
What happens to a dream deferred?
Does it dry up
like a raisin in the sun?
Or fester like a sore –
And then run?
Does it stink like rotten meat?
Or crust and sugar over –
like a syrupy sweet?
Maybe it just sags
like a heavy load.
Or does it explode?
– Langston Hughes, 1951

I am reading Hughes and thinking: can hip-hop save the revolution, or did it already try, only to be appropriated for corporate conspicuous consumption? The reason I’m asking is because this poem sounds like hip-hop to our ears. I’m reminded lately of all the radical movements and musics that have, like the laws of entropy, been sanctioned by the status-quo. It happened on a meta-scale to America–born of revolution against the very imperialist, authoritarian power it has now become. I think it happened to hip-hop and rap on so many levels, though renegades still spit. The reason I’m asking is because I remember reading Langston as a young jazz-head in my room in the large house in a gated community where no one ever acknowledged their neighbors in which my family lived like an island, broken off the tip of Europe in 1992, and I remember being floored by the rhythms he was using, and I remember especially the power of this poem. Returning now, after my deep stakes in resisting fascism, I see an even higher calling for the poem: only one direction, insurrection. And given Martin Luther King Jr. hadn’t given his iconic speech until 1963, it is striking in its predictions. It presents a crisis, a la Whitman, that doesn’t get resolved by the poets persona. So, although it’s not like Whitman to do that. I would argue, it is very much like Whitman to leave the action implied by the crisis up to the reader. Whitman’s poetry had a rhythm and tone all its own too–out of breath, electric in the senses.

Many Black Anarchists see a strong connection between jazz and resistance. Ashanti Omowali Alston, a NYC based activist, writer and public speaker, writes, “Consider jazz: it is one of the best illustrations of an existing radical practice because it assumes a participatory connection between the individual and the collective and allows for the expression of who you are, within a collective setting, based on the enjoyment and pleasure of the music itself. Our communities can be the same way.” (From a speech given at Hunter College, NYC, on October 24th, 2003).

From “Anarchism in Daily Life“:

“The truth is that Jazz was born with an enormous bang in the beginning of the 1900’s. From 1900 to 1920, Jazz faced a rapid inflationary period with many achievements that surprised not only America, but also Europe.
Jazz was born in America and introduced a unique sound while utilizing the spontaneous methods of African music. Despite the influence, African music was nothing akin to Jazz and one musician even commented after a trip to Africa: “No America, no jazz.” In 1917, Jazz was packaged and sent around America to over one million listeners for it’s first recording. A strong fan-base for any artistic output. However, the unforeseen success of the first Jazz recording went unnoticed as recording industries (like Barzun) remained interested in only “classical artists and more polite dance orchestras.” Before 1920 came Jazz was already international and bands would cross the Atlantic to tour Europe. The unique style was a shock and faced many good reviews. All this took place in a time when musical self-expression was supposedly confined to church choirs.
As Barzun dryly remarks upon “what occassionally appeals to the untrained rythmical or melodic sense of the multitude has a way of quickly disgusting [the political classes] whom it has first attracted” the Culture Industry is born.

In introducing an anthology called Pleasures of Music, Barzun commented upon what had already be theorized and coined by Theodor W. Adorno as the “Culture Industry” fifteen years prior:

Music nowadays, whether we like it or not, is interwoven with the texture of our lives from morning till night. Music resounds for, with, and through everything; it is canned and broadcast, recorded and rebroadcast; it is, so to speak, piped into our houses at the very time when it has virtually ceased to be piped within them.

The Culture Industry “was a system by which society was controlled though a top-down creation of standardized culture that intensified the commodification of artistic expression.” Barzun explains this in his claim that music has been taken in by the entertainment industry and broadcasted to people in their homes rather than the people producing the music themselves. True art is filtered through a system that only accepts what is “marketable” and “economical.” While Barzun saw the Culture Industry as an invention that would give people what they wanted, Adorno accused it of only giving people an art that was a simplistic yes-man for the entire system as well as satisfying false (or invented) needs to “manufacture contentment.”
From it’s very beginning Jazz has represented “freedom and forward thinking.” Jazz and it’s proponents have attempted to find their place apart from the Culture Industry as early as the late 1930’s when fans of the New Orleans style criticized popular big bangs as “anti-jazz.” The same occurred in the 1940’s when fans of the big bands criticized Bebop. Through the decades Jazz has been at a constant revision of its style.
Early on Jazz musicians were experimental. Their practice of collective improvisation, a method that gave each individual complete freedom within their role to add to the whole. Jazz critic Bob Blumenthal claims that “mutual responsibility rather than anarchy is the result.” However, it is precisely that “mutual aid” (to use Peter Kropotkin’s term) that holds an anarchist society together. Despite popular belief, anarchism is not simply chaos, but the replacement of unnecessary authoritarian institutions with collectively run democracies whether they be in the form of worker or community-based councils. Therefore, when contemporary Jazz musician Wynton Marsalis says, “Jazz is a musical manifestation of democracy,” he is equating Jazz to anarchism. The same is true for the constant evolution of style (which has been a devolution of formal structure in music). The importance of freedom within the Jazz evolution mimics an experimental society that can continually progress through democracy without the illusions of authoritarian/business interests or media.
By the 1960’s a faction within Jazz had formed that consciously saw itself as the avant-garde. At the same time rock music was becoming more political with Bob Dylan and The Beatles. A major change in the world was occurring much like Barzun’s cultural revolution, but this one was for the lower classes. Martin Luther King Jr. gave his famous “I have a dream” speech on the steps of the Lincoln Memorial on August 28, 1963. The Civil Rights movement was taking a firm stand. Two years later in the same month riots exploded in the Watts neighborhood of Los Angeles, California. The riot left 34 dead and the neighborhood destroyed with no hope for repair. Some were willing to turn to violence to escape their destitution. However, on July 23, 1967 a more peaceful and optimistic revolt occurred that is now known as the 12th Street Riot. Four days later The New York Times commented that “Negro looters smiled and waved at white policemen and newsmen.” An apparent festival occurred in integrated neighborhoods as whites and blacks raided stores together. All over one could see whites and blacks conversing in stores as they stole “smoked hams and canned goods”—a sight reminiscent of the spontaneous cafes in a bombarded Paris during the Commune. Not only the Civil Rights movement, but also Feminist movements thrived. Alongside the sit-ins of the Civil Rights movement was the bra-burnings of the Feminists. Towards the end of the decade in May 1968 a group of avant-garde artists, writers, and filmmakers from all over Europe and America called the Situationist International bolstered a revolution in Paris. Students occupied the University of Paris (as well as other universities) and declared it an autonomous zone. Workers began to occupy factories against the advice of trade unions. Whole streets were conquered and on the walls were painted slogans such as “never work” and “live without dead time.”
It is obvious that the 1960’s brought about a world revolt, one that was made by the lower classes and affected the political classes. Avant-gardes and revolutionaries from all disciplines began to challenge mindlessly accepted systems. The events of this decade set the stage for the vast changes in everyday life that we all live with today. The anarchist principles laid down by the avant-gardes of the 1960’s are most recognized in the underground hardcore music scene of today.”

This entry was posted in Uncategorized and tagged Anarchism, Anarchist, Anarchy. Bookmark the permalink.