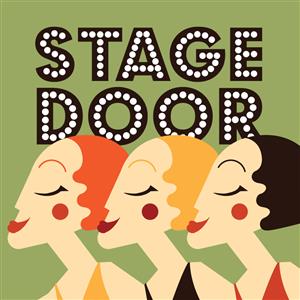 Plucky. It’s a word you don’t hear much now. But in 1934 it might have been a perfect word to describe the determination and wit of the women in the play, “Stage Door.” Pulitzer prize-winning author Edna Ferber teamed up with George S. Kaufman in 1936 to write this classic American comedy. Presented by the College’s Department of Theatre and Dance, the play takes audiences inside a rooming house for aspiring actresses near the heart of the New York theatre scene. Through the eyes of these actresses, the audience is given a view of the live theatre as an arena of great honor which inspires passionate devotion, while the story contrasts this with a view of the then upstart movie industry as crass and commercial.

Director and faculty member, Mark Landis, says, “This play certainly has clever, witty dialogue, but, badinage is not its main characteristic. Ferber depicted the very real strife of women who wanted to build independent lives for themselves in a time when all around them were images of women staying along the conventional path toward marriage and motherhood.”

Following its Broadway success, “Stage Door” was later adapted into a movie starring Katherine Hepburn, Ginger Rogers and Lucille Ball. In the film version, Ferber and Kaufman’s harsh view of Hollywood was so blunted as to be nearly invisible.