Click the link below to hear the 8th episode of HispaCasts created in collaboration with Dr. Mike Overholt from the Teaching and Learning Team. Dr. Mark P. Del Mastro, Chair of Hispanic Studies, interviews Devon Hanahan, Senior Instructor of Spanish, Coordinator of the College of Charleston’s Basic Spanish Language Program, and Director of the Casa Hispana, to discuss the special living-learning residence on campus that affords students of Spanish a unique educational opportunity outside the classroom. 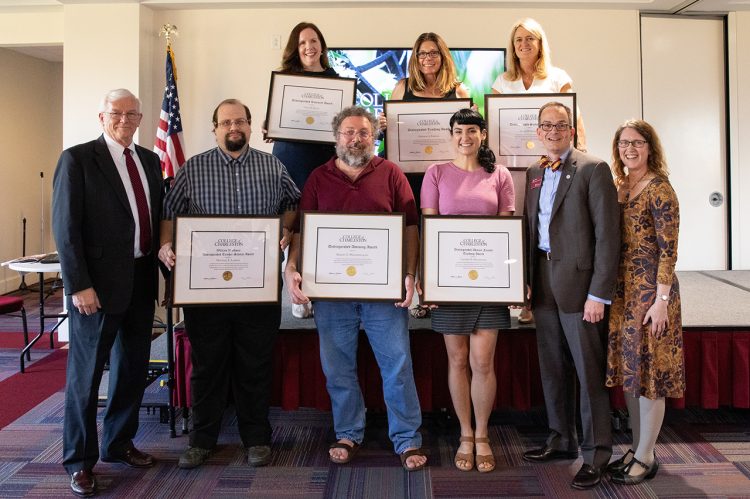 For additional pictures and the related details, click here for The College Today article.

At the Centennial Conference of the American Association of Teachers of Spanish and Portuguese (AATSP) in Salamanca, Spain on June 25-28, 2018, Professors Mark P. Del Mastro, Susan Divine and Devon Hanahan had active roles in various sessions:

On Monday, June 25, Professors Divine and Hanahan co-presented “High impact practices during study abroad: Portfolios of Trujillo, Spain” during a 75-minute session.  This presentation was based on Divine’s and Hanahan’s experiences co-directing CofC’s Maymester program in Trujillo for two consecutive summers in 2017 and 2018.

Dr. Del Mastro organized and chaired the National Collegiate Hispanic Honor Society’s Best Practices and Informative Session that featured the presentations of student leaders from four different universities from across the U.S.   He also hosted the reception for Sigma Delta Pi members and guests and directed the event’s presentation of various awards and recognitions, to include the initiation of Dr. Frank Nuessel of the University of Louisville into the Order of Don Quijote.  Del Mastro also presented reports to the AATSP’s Board of Directors in his role as AATSP Finance Committee Chair and Executive Director of Sigma Delta Pi, which is a partner of the AATSP.

The inaugural meeting of the newly formed Hispanic Studies Advisory Board was held at 3:00pm on December 7 in the President’s Board Room of Randolph Hall and began with an address by the College of Charleston President Glenn McConnell.  Board members will assist the Department of Hispanic Studies with funding objectives, recruitment and extra-curricular program development.