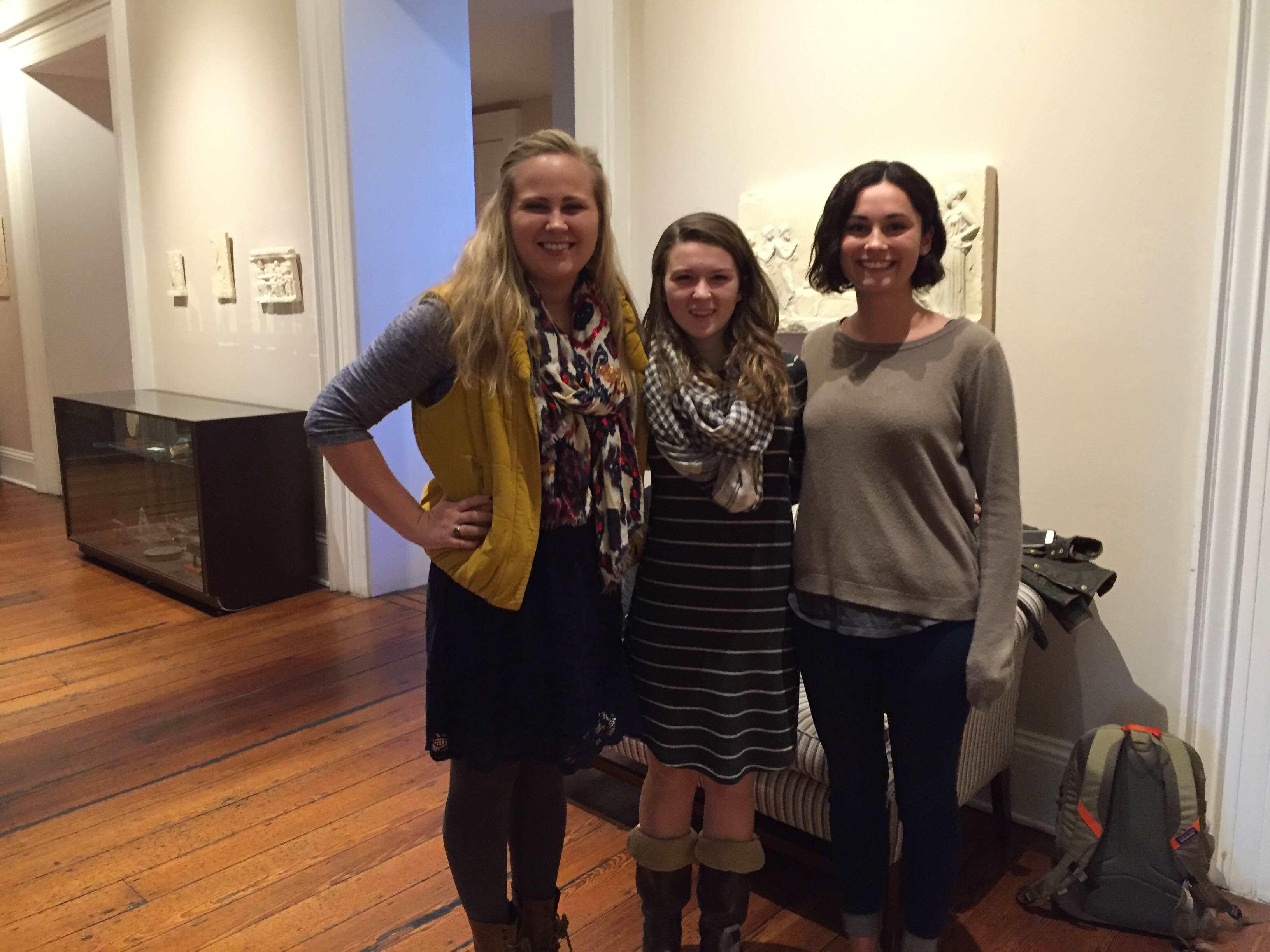 In a College ceremony held on Wednesday, September 28, Lucia Johnson and Edward Vest were inducted into the prestigious Bishop Robert Smith Society at the College of Charleston.  Membership in the Society is reserved for those giving over 1,000,000 to the College.

The Johnson-Vests are long-time supporters and friends of Classics at the College. Lucia was an alumna of the College and a dedicated Latin teacher. Lucia and Edward created the Johnson-Vest Scholarship in 1995 in order to encourage the study Latin and Greek, especially those studying to become Latin teachers. Every year many Classics majors benefit from their Scholarship’s generous support. This year’s recipients are pictured below with members of the Johnson-Vest family at the ceremony.

On behalf of the Classics Department, faculty, and students, I want to thank Lucia and Edward for their generosity. 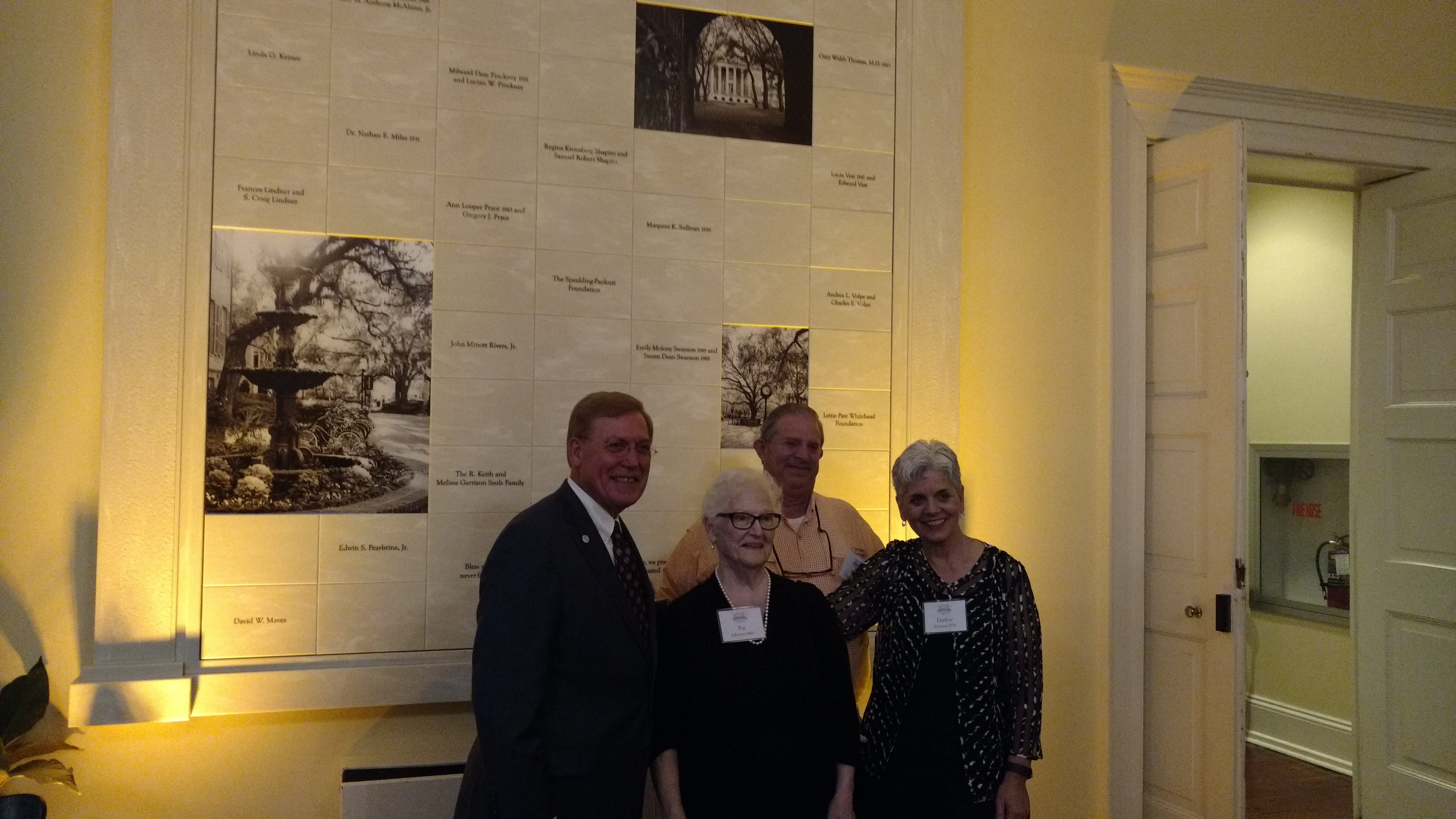 Pat, Darlene, and Steven Johnson (representing the Johnson-Vest family) with President McConnell. The plaque in the background carries the names of Lucia Johnson and Edward Vest (second down from the top right). 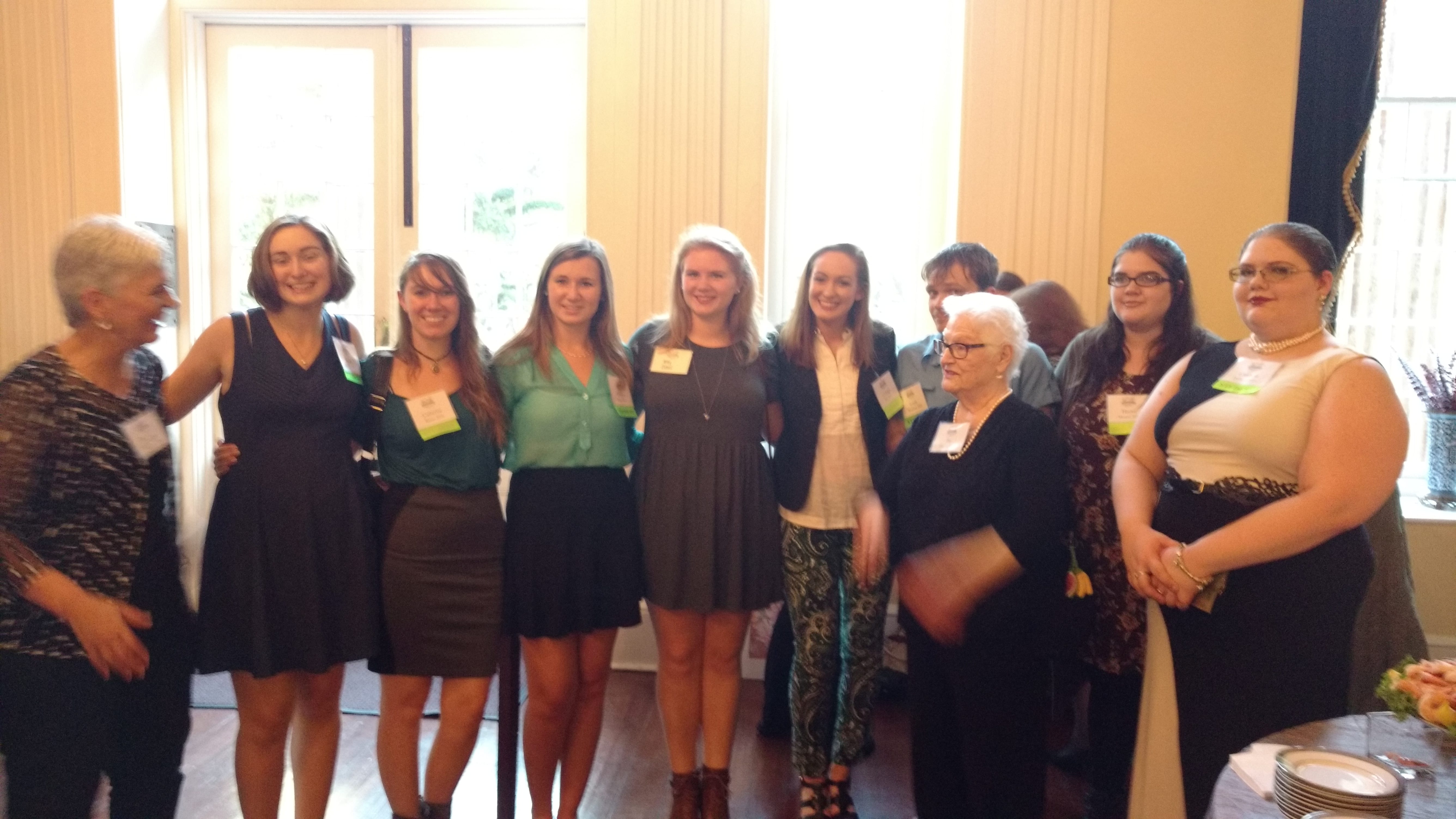 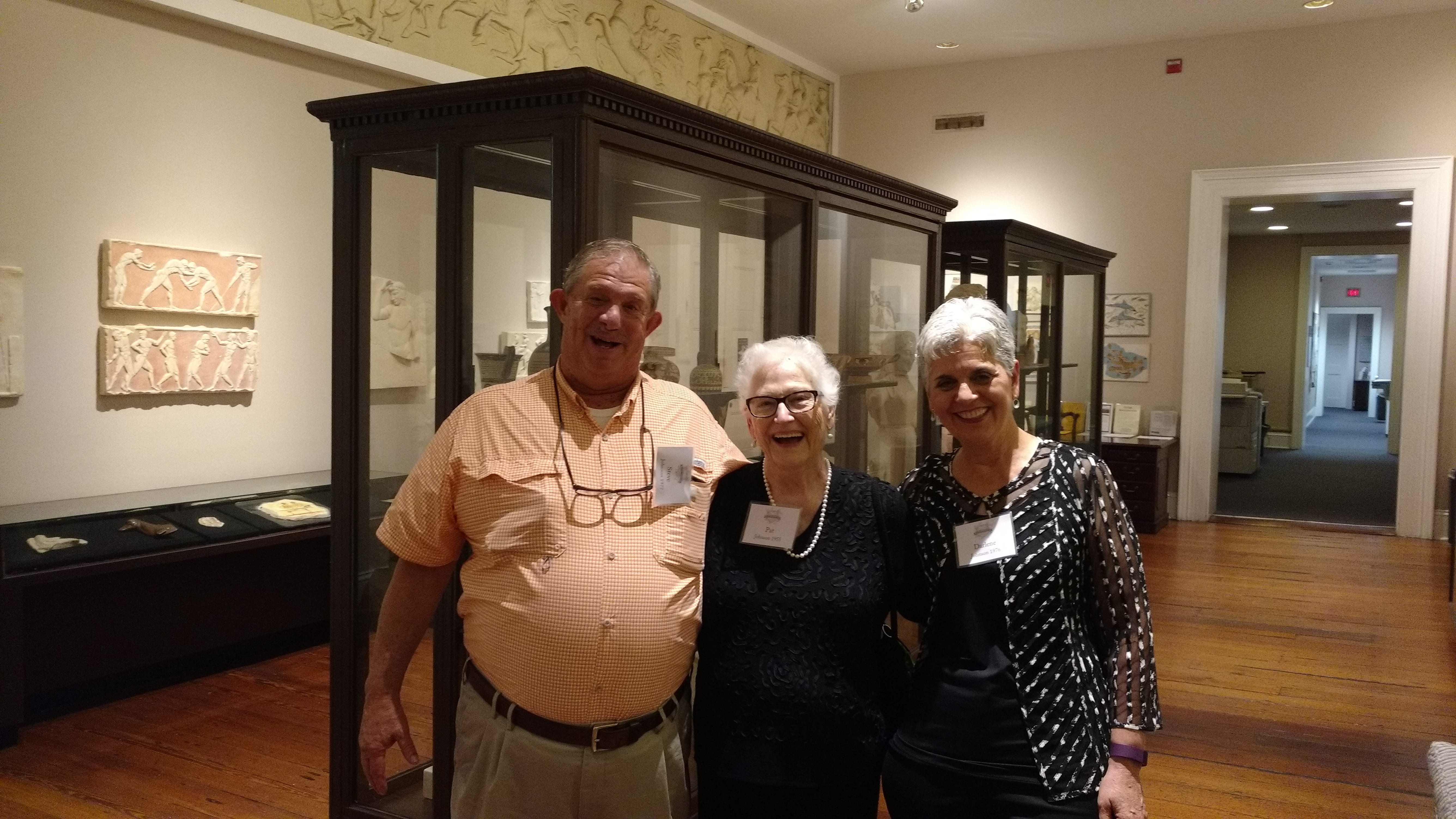 Steven, Pat, and Darlene Johnson in the Classics Cast Museum

Summer 2016 was an exciting time for the students of LCWA!

Aisha Gallion, double majoring in African American Studies and Anthropology, participated in the Moore Undergraduate Research Apprentice Program (MURAP) at the University of North Carolina at Chapel Hill. This program is a graduate-level research experience for highly talented undergraduate students from diverse backgrounds who are interested in pursuing doctorates in the humanities, social sciences or fine arts. Each summer MURAP selects 20 rising juniors and seniors in college to participate in their intensive, ten-week research experience. Aisha decided to research authenticity and masculinity in hip-hop beefs. She specifically, focused on the recent Drake and Meek Mill beef. Aisha submitted a paper titled, “Gettin’ Bodied by a Singin’ Nigga: What’s Really Real? Questioning Authenticity and Masculinity in the Drake and Meek Mill Beef”.  She also presented her work to her cohort and other mentors (professors at UNC Chapel Hill).

Eden Katz, an International Studies and Public Health major, lived in Kampala, Uganda, on a Fulbright Scholarship while continuing to research her bachelor’s essay on early and forced marriage in conflict zones.

Hannah James, double majoring in Anthropology and Archeology, spent four weeks in residence at James Madison’s Montpelier, participating in an archaeological excavation. During this time, she was trained in various lab procedures and excavation methods, in part under the tutelage of Kristina Poston (BS Anthropology, Archaeology minor ’10). The focus for the season included the South Yard of the property, which housed the domestic enslaved individuals until the mid-19th century. The excavation was necessary in order to confirm evidence of a supposed structure and to understand its function and construction materials. The team gathered evidence on what life was like for the enslaved individuals living or working in the structure, and more broadly how that information tied into the lives of those living at Montpelier Plantation. Hannah reports that ‘I was given so many opportunities to excavate everything from brick foundations to delicate and fragile artifacts, trained in both lab and field techniques by some of the brightest minds in the discipline. It was truly a joy to spend a portion of my summer with Montpelier.’

Jonah Crisanti, a French Major and Archaeology minor, spent the summer in southern France, taking part in several excavations dating to the Paleolithic period. The experiences were arranged in collaboration with Evelyne Cregut-Bonnoure, Director of the Musée d’Histoire naturelle d’Avignon, and Drs. Bourdier (French) and Newhard (Archaeology). As a result of these experiences, Jonah developed not only a deep understanding of archaeological methods but also gained experience in the subtle intricacies of working and living within French society. He worked on two prehistoric cave-sites.  The first, Tautavel, dated to 500 kya and focused upon exploring human and animal interactions. The second, Coulet des Roches, focused strictly on understanding the faunal record of the Palaeolithic circa 22 kya. Jonah reports that ‘On any given day, one was expected to dig, sift sediments, clean and mark findings, enter data in the computer, or cook for what was sometimes upwards of 30 people.  Over the course of these internships, the chance to work overseas in a professional setting has been priceless.’

Melaina Castengera, an International Business major minoring in European Studies and German Studies, participated in the Department of German and Russian Studies’ internship program. She found a role for herself with global fragrances firm Symrise where she’s engaged in a variety of duties from financial business planning to technical marketing for aroma molecules. “I’ve been consolidating the company’s competitor profiles,” explains Castengera, “and I have participated in an audit with a Japanese pharmaceuticals client as well. I attend meetings with the technical marketing manager where discussions are held in German regarding the portfolio of products, the planning process and strategies.” Castengera says she sought this internship as a way of distinguishing herself from her peers. “So far, this has been one of the most educational experiences of my college career.”

Morgan Larimer, double majoring in International Studies and Biology as well as minoring in Enviromental Studies, has been awarded the prestigious Rotary Scholarship. After she graduates in May 2017 she will attend King’s College London for an MS. This is the 10th National Competitive Award that members of the International Scholars have received.

Rachel Taylor, an International Studies and Political Science major with a minor in Spanish, lived and studied in Mexico through the Fulbright English Teaching Assistantship Program mentoring local youth.

Sherwan Saraf, an International Studies Major and German Minor, received an internship with Mercedes Benz Vans upon returning from a semester in Bamberg Germany.