The African American Studies Fall 2017 Film Festival asks out loud how the US film industry has engaged with white liberal complicity in white supremacy over the past fifty years. We begin with Guess Who’s Coming to Dinner (1967), which is too focused on self-congratulatory, white liberal glad-handing to realize how ignorant the white characters are to their own racist assumptions. To quote a line from James Baldwin’s The Devil Finds Work, what the film’s writers fail to imagine is that “As the parents of a world-famous man [Sidney Poitier’s character], they [the black parents], indisputably, out-rank their [white liberal] hosts, and might very well feel that the far from galvanizing [white] fiancée is not worthy of their son.” In George Romero’s classic zombie movie, Night of the Living Dead (1968), the specter of whites unable to believe in black heroism and magnanimity proves to be as dangerous as the zombies themselves. The racist views of the film’s white characters ultimately leads to the demise of the black hero, who is deemed essentially equivalent to the zombies he protects them from. This then begs the question, ‘who are the real monsters in the film?’ (Watch Key & Peele’s “White Zombies” sketch for an amusing flipping of the script.) And then there’s Jordan Peele’s Get Out (2017), which combines the premise of Guess Who’s Coming to Dinner with the genre of Night of the Living Dead to make the insidiousness of ‘polite’ white supremacy a thing of horror that plagues the main character. The festival ends with a documentary about perhaps the most eloquent and incisive critic of white liberal complicity, the inimitable James Baldwin. I Am Not Your Negro (2016) indicts white America for its willful blindness to the horrible crimes collectively committed against black people, all the while finding in the fact of Baldwin’s life reason to avoid drowning in pessimism and despair.

The screenings, which will be at 6:00 pm in Maybank 100, are free and open to the public, and each will be followed by a discussion led by a CofC faculty member. Popcorn and soda will be served as well. 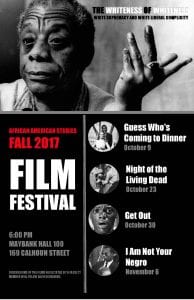