Honors College faculty fellow and associate professor of public health Brian Bossak recently received a Fulbright Scholar Award and will spend the next year learning and lecturing at the University of Bologna as part of Fulbright’s international educational exchange program. Learn more about Dr. Bossak’s research below, and then check out Alicia Lutz’s complete article in The College Today for more details about all the impressive CofC faculty. 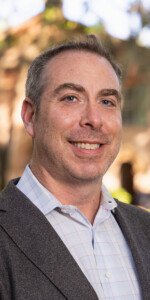 The Fulbright Scholar Award will allow Bossak to teach two graduate-level public health courses – one focusing on the human health implications of climate change, and the other exploring the interaction of health and emerging technologies – at the University of Bologna in Italy, where he will also conduct research on the development and use of quarantine and isolation in historical pandemics in the locations in which they occurred.

Bossak says the University of Bologna is the perfect place for his research, since it has centuries of information on the Black Death that plagued Europe from 1347 to 1351.

“The Black Death was a pivotal experience in human history,” explains Bossak, who has authored and co-authored manuscripts exploring this historical pandemic. “Interestingly, non-pharmaceutical interventions utilized during the most recent COVID-19 pandemic, such as quarantine and isolation, are derived from their development in Italy during the Black Death. In fact, many scholars suggest that quarantine and isolation efforts helped reduce mortality during the Black Death in localities where it was enforced, such as Milan, versus places where it wasn’t, such as Florence.”

While at the University of Bologna – which is the oldest university in the Western world still in operation – Bossak also plans to study the use of isolation and quarantine during the Plague of 1630, which ravaged parts of northern Italy.

“I am excited about the opportunity to explore archival information on these epidemics, delve into the literature about these experiences and witness locations where these historical events took place,” he says, noting that he’s also looking forward to meeting colleagues in Italy with similar interests, learning about the Italian higher education system and engaging in cultural exchange and learning that goes beyond the classroom and traditional scholarship. “I am hopeful that this prestigious and highly competitive award will represent just the first step in the process of establishing a nexus between myself, my program and perhaps even CofC itself with additional international experiences and academic exchange that broadens our continued development as a center for globally engaged students, staff and faculty.

“I am most grateful,” he adds, “to have this opportunity for focused scholarship and exploration on pandemics that, as recent events have indicated, remain an evergreen possibility within the human experience.”