Posts from the ‘been’ Category

cruising in the ruins: the question of disciplinarity in the post/medieval university [from punctum books] Sessions: The Inter-Discipline of Pedagogy; Getting Medieval on Medieval Studies; Medieval Touchscreen; Families Old and New; Going Postal: Networks, Affect, and Retro-Technologies; Digging in the Ruins: Medievalism and the Uncanny in the University [I & II]; Future-Philology; Intellectual Crimes: Theft, Punking, and Roguish Behavior; Impure Collaborations; Enjoying the End (Again); Textual Fault-Lines; All In a Jurnal’s Work: A BABEL Wayzgoose; Ecomaterialism; The Urmadic University; Synaesthetics: Sensory Integration Against the Disciplines; Hoarders/Hordes; Parts, Wholes, and the New; Will It Blend? Equipping the Humanities Lab; What Is Critical Thinking?; #Occupy Boston: Humanities and Praxis; Se7en Undeadly ScIeNceS: The Trivium and Quadrivium in the Multiforking University; Wild Fermentation: Disciplined Knowledge and Drink; The Historiographic Ghost. END_OF_DOCUMENT_TOKEN_TO_BE_REPLACED

David Fried, Way of Words, No. 3: “A mind once stretched by a new idea, never regains its original dimension.”

David Kaiser (Germeshausen Professor of the History of Science and Department Head of MIT’s Program in Science, Technology, and Society, M.I.T.)

“Read more”  for all the details about the featured presenters, the conference theme and call for papers, and the conference organizers END_OF_DOCUMENT_TOKEN_TO_BE_REPLACED

[See postmedieval site at Palgrave for more information on this issue.]
16
Jul 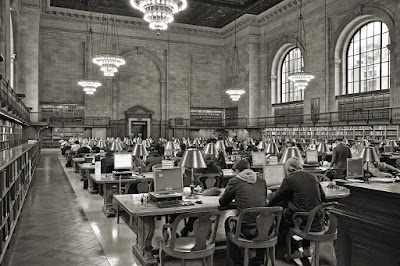 Figure 1. Reading Room,
New York Public Library
The papers for the Crowd Review of postmedieval‘s special issue onBecoming-Media [slated for publication in March 2012] are now live and available for comment on the Crowd Review’s website:

In step with the mission of the journal, this issue represents a wide range of fields and subjects, including performance studies (dance), architecture, art history, poetics, medieval literature, history of printing and engraving, the decorative arts, movement studies, history of taste and judgment, object-oriented studies, intellectual history, new media and technology studies, composition studies, mysticism, philosophy, botany, the history of books, history of science, the vegetal, the animal, theology, etc. What all of the essays have in common, in the words of the special issue’s co-editors, Jen Boyle and Martin Foys, has something to do with

our dependence on the recursive circuitry and tangle of technologies, bodies, narratives, spaces, and mediating technics, across historical periods and across literary, scientific, philosophical, and theological modes of expression. END_OF_DOCUMENT_TOKEN_TO_BE_REPLACED

[See postmedieval site at Palgrave for more information on this issue.] Allan Mitchell [University of Victoria], “Cosmic Eggs, or, Events Before Everything”

Ben Woodard [Centre for the Study of Theory and Criticism, University of Western Ontario + Naught Thought], Response to Jeffrey Cohen

for the precis of the project, plus the program and audiofiles for Speculative Medievalisms I [held at King’s College London in Jan. 2011], go HERE

And here are details on the week-plus of “Speculative September NYC” (Speculative Realist- and Object Oriented Ontology-related) events starting on September 8.

Historicizing madness produces two-fold definitions. On one hand, medieval literature and history is populated with those who were sometimes tormented by demons and beatified by visions. What we may now call schizophrenia, some medieval texts perceived as contact with the divine. Saints self-mutilated and starved themselves (“holy anorexia”), turned a supposed abhorrence of sex and the body into super-charged modes of holy eroticism, and were visited by wracking anxieties and irresistible compulsions, not to mention episodes of psychosis. On the other hand, madness was hardly an empty empirical category in the premodern period. Medieval views of madness, while not coextensive, do overlap with our own. They provoked doubt about the visions of some, generated compassion for the sick, and led to ruminations on (among other things) the consequences of sin. In our own time genius has been closely coupled with mental illness (Nietzsche to Eve Sedgwick) and even suicide (Woolf to Deleuze to David Foster Wallace), and scholars (especially in queer studies) have found in sorrow, depression, schizophrenia, trauma, and other forms of negative affect the grounds and inspiration for critique—and even new critical modes. Others reject the romanticization or valorization of mental illness, personally experience it as crippling and devastating to productivity, or embrace optimism and sanity in their scholarship. END_OF_DOCUMENT_TOKEN_TO_BE_REPLACED

It was not in natural processes that the Greeks first experienced what physis is, but the other way around, on the basis of a fundamental experience of being in poetry in thought, what they had to call physis disclosed itself to them. –Martin Heidegger, Introduction to Metaphysics

The above epigraph for this session is not meant as a doxa to be specifically proven, contested, or adhered to directly by any of the session’s papers, but as an attempt recall recent new materialisms and object-oriented philosophy to the question of physis as a question which ineluctably links concerns for what is sometimes called ‘matter’ with poetics. The session will thus attempt to think some of the concerns which an approach to cosmology from models considering physics, poetics, and biology share with the turn to vital, vibrant, or related materialisms and object-oriented philosophy. Specifically at issue will be the question of how the task of these supposedly different (poetics—productive/making, physics as descriptive science of what one already assumed is ‘there’) orientations to matter might coincide on the question of cosmology. END_OF_DOCUMENT_TOKEN_TO_BE_REPLACED 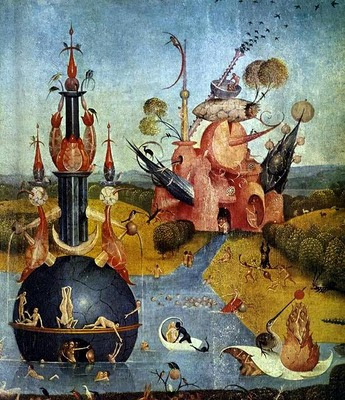 After a whirlwind of 3-1/2 days in London, which included a side-trip to Cambridge, and then returning to Saint Louis to jump into teaching, I have finally posted, at the Internet Archive, the audiofiles of the talks and responses delivered at Speculative Medievalisms: A Laboratory-Atelier, held at The Anatomy Museum at King’s College London two Fridays ago, Jan. 14th. The event represented a really interesting convergence (or collision) between medievalists (Kathleen Biddick, myself, Anna Klosowska, and Nicola Masciandaro) and scholars working in later periods in religious studies (Anthony Paul Smith, Univ. of Nottingham), economics and international relations (Nick Srnicek, London School of Economics), media and technology studies (Eugene Thacker, The New School), cultural theory and the audio unconscious (Scott Wilson, Kingston Univ.), philosophy of nature (Ben Woodard, European Graduate School), queer theory and continental philosophy (Michael O’Rourke), and Marxist theory and literature (Evan Calder Williams, Univ. of California, Santa Cruz). [Read more and find audiofiles at In the Middle.]

So the medieval studies I am thrown into is a gravely levitating scholarly being, the lovely becoming light of weight in all senses: metaphoric, literal, and above all in the truest most palpable sense of the phenomenal poetic zones of indistinction between the two. This means, in tune with the Heraclitan oneness of the way up and the way down, not flight from but the very lightening of gravitas itself, the finding or falling into levitas through the triple gravities of the discipline: the weight of the medieval (texts, past), the weight of each other (society, institutions), and the weight of ourselves (body, present). Towards this end I offer no precepts or to-do list, only an indication of the wisdom and necessity of doing so, of practicing our highest pleasures, in unknowing of the division between poetry as knowledge and philosophy as joy, in opposition to the separation between thought and life that best expresses “the omnipresence of the economy,” and in harmony with the volitional imperative of Nietzsche’s “new gravity: the eternal recurrence of the same”: “Do you want this again and innumerable times again?” This Middle Ages? This medievalist?

Speculative Medievalisms is a collaborative and interdisciplinary research project focusing on the theorization and practical development of the speculative dimensions of medieval studies. The term “speculative” is intended to resonate with the full range of its medieval and modern meanings. First, speculative echoes the broad array of specifically medieval senses of speculatio as the essentially reflective and imaginative operations of the intellect. According to this conception, the world, books, and mind itself were all conceived as specula (mirrors) through which the hermeneutic gaze could gain access to what lies beyond them. As Giorgio Agamben explains, “To know is to bend over a mirror where the world is reflected, to descry images reflected from sphere to sphere: the medieval man was always before a mirror, both when he looked around himself and when he surrendered to his own imagination.”[1]  END_OF_DOCUMENT_TOKEN_TO_BE_REPLACED