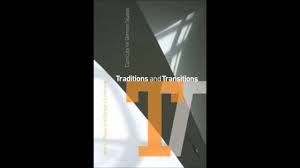 A new article from Dr. Morgan Marcell Koerner has just appeared in Traditions and Transitions: Curricula for German Studies, an essay collection with works by 20 international scholars in the field of German as a Second or Foreign Language, published by Wilfrid Laurier Press and edited by John Plews and Barbara Schmenk. Entitled “Literatur liberated from Wissenschaft: Writerly Approaches to Literature Across the German Curriculum,” the book chapter  “proposes using Roland Barthes’s theory of the ‘writerly’ text as a basis for curriculum design and implementation for German language and literature. He takes issue with formal approaches to literary study and illustrates how to enact a curriculum for reading and writing German through parody that is more participatory, more open-ended, and more creative” (Plews/Schmenk, “Traditions and Transitions” 15-16).

The chapter is part of a larger project on creative writing and theater as approaches to foreign language literature and culture. Over the past 6 years at the College of Charleston, Dr. Koerner has investigated the effectiveness of these methods as a gateway into foreign language literature for millennial students who have less experience with reading literature than previous generations.  “I’m particularly grateful for my students’ role in this research,” Koerner notes. “I’ve had a fabulous group of students at all levels since I came to the College in 2007. Whether they are staging a rap battle in German 101 or rewriting literary works and performing them in front of a live audience in my senior level theater seminars, my students have been more than willing to engage in more playful and theatrical approaches to German language, literature, and culture. This willingness to ‘ham it up’ is not only crucial for speaking a foreign language, it is also extremely useful as an approach to difficult literary texts.” Dr. Koerner, who became an Associate Professor of German this Fall, counts himself lucky not only because of his students, but also because his supportive colleagues and administration: “Not every institution would reward tenure to an Assistant Professor of German who publishes at the intersection of performance studies and language pedagogy, but The College of Charleston and the School of Languages Cultures and World Affairs clearly care about scholarship on innovative teaching and learning. My former chair Dr. Nancy Nenno was always very encouraging of this line of research, and the School of LCWA and the College administration has been a champion of expanding traditional models of scholarship to include the scholarship of teaching.”

At present, Dr. Koerner is currently working on two articles based on action research from his most recent adventure with theater, his performance oriented course “Beyond Drama: German Theater into the 20th Century” from the Spring of 2013” in which he and his students explored experimental theater traditions from throughout the 20th century. The course culminated in a spectacular live performance in German entitled  “Beyond Drama:  13 Performers Try to Transform the Audience” (pictures of this performance from April 23rd, 2013 are available on the German and Slavic Studies Department’s facebook page: https://www.facebook.com/CofCGermanSlavic).

Professor Oksana Ingle’s book review of Andrejs Plakans’ A Concise History of the Baltic States  (Cambridge, UK: Cambridge UP, 2011) appeared in the spring 2013 issue of Slavic and East European Journal.

In weeks and months ahead, all significant news related to our department’s students, faculty and German and Russian programs will be posted here.  Wish to post something newsworth?  Please post it at our Facebook page and we’ll take it from there!  Please also “Like” us on our FB page: https://www.facebook.com/CofCGermanSlavic.